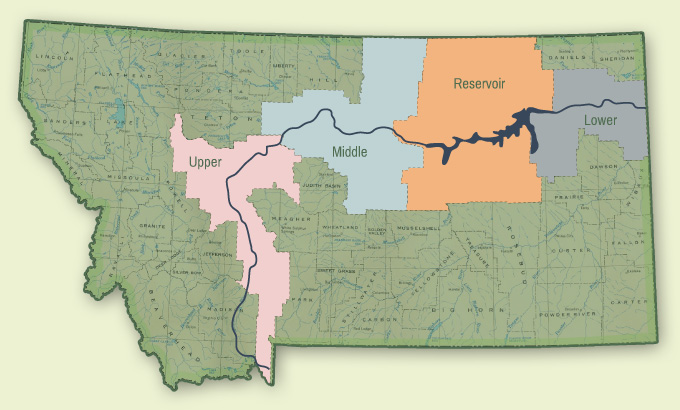 The Upper Reach of Montana’s Missouri River winds through Gallatin, Broadwater, Lewis & Clark and Cascade Counties. It begins at the Headwaters and provides some of the best cold-water trout fishing in the Lower 48. This diverse stretch of the river is home to multiple dams that provide water storage for irrigation and power generation. Canyon Ferry, in Broadwater County, is the largest reservoir in the Upper Reach.

The Middle Reach consists of Blaine, Chouteau, and Fergus Counties. This reach includes the 149-mile stretch of the Missouri that was designated as a National Wild and Scenic River in 1976 as well as the Upper Missouri River Breaks National Monument, which was created by a Presidential Proclamation in 2001. The unique geology of the middle reach is showcased by white cliffs, badlands, and volcanic dikes. This reach is also celebrated as one of the longest remaining free-flowing stretches across the entire length of the Missouri River.

The Reservoir Reach includes Phillips, Valley, Garfield, and Petroleum counties and is home to some of the largest features along the river – the Fort Peck Dam, which is the largest hydraulically filled dam in the U.S.; the Fort Peck reservoir, which provides 25% of the storage for the largest reservoir system in the U.S.; and the Charles M. Russell National Wildlife Refuge, the 2nd largest National Wildlife Refuge in the continental United States.

The Lower Reach of Montana’s Missouri River lies downstream from the Fort Peck Dam and includes Roosevelt, Richland, and McCone counties. In addition to being one of the longest remaining free-flowing stretches along the entire Missouri River, this reach is home to 155 privately-owned pump sites serving 53,000 acres of cropland that add more than $20 million to Montana’s economy.